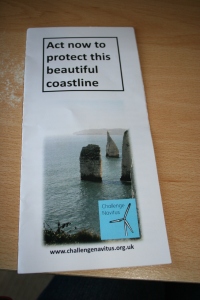 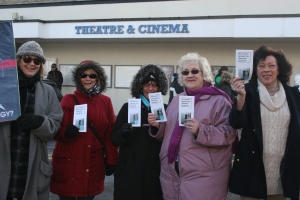 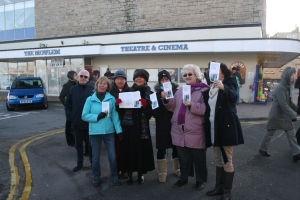 Linking hands along the sea front

Let’s get this straight.  I am NOT against WIND energy.  I accept we must have alternatives to coal, oil and gas and that these must be sustainable and renewable but to put a 78 square-mile wind farm in the busiest part of the Solent is not just plum crazy it is dangerous and likely to cause endless problems including noise pollution for not only in our lifetimes but for the lives of our grandchildren.  It is a fact that, once installed, these turbines are too expensive to remove so if a) they do not do the job or b) another way is found to be better or c) they are damaged and become a hazard to shipping, nothing can be done about it as the companies will by then be losing money and will not have the finance or expertise to remove them.

Here in Swanage we are at the gateway to England’s only natural UNESCO World Heritage Site but we won’t be looking at a World Heritage site in future if the Eneco project in the Solent goes ahead.  In other parts of Europe where these wind farms have been placed close to tourist areas, visitor numbers have plummeted and livelihoods have been lost.  Here in Swanage we are cut off from Bournemouth and Poole by a stretch of water at Sandbanks and our young people need the seasonal work which the large visitor numbers ensure each summer, autumn and spring.  Even in winter we have visitors including many from overseas.  On a clear day we can see the Isle of Wight from our beach but we won’t be looking at the IOW soon but at monstrosities possibly 673ft tall.

Before I go any further a word about the Eneco project.  Eneco, a Dutch company and EDF, a French business have joined forces in a bid to develop a windfarm called Navitus Bay in the open sea between the Isle of Wight and The Isle of Purbeck.  The site will be visible from most of the coastline between St Aldhelm’s Head in the west to St Catherine’s Point in the east including the sea fronts of Swanage, Sandbanks, Poole, Bournemouth and Christchurch.

This coastline is one of the most beautiful in the UK and internationally renowned for its bio-diversity.  As well as being a World Heritage Site, it contains two Areas of Outstanding Natural Beauty and a National Park.

There is a good reason why the Navitus Bay project is being pursued by these two companies as our Government’s guidelines suggest that the project should be more than 14 miles out to sea to mitigate the visual impact on our highly sensitive coastline.  Eneco and EDF plan to locate the windfarm just eight miles out from Swanage. Of course if they built a windfarm this size off Holland or Germany it would almost certainly be sited a minimum of 15 miles and 18 miles from shore.  Yet we protesters were asked this morning if WE were being NIMBY.  Surely it is Eneco and EDF who are being NIMBY.  They can’t do it cheaply enough in their own back yard so they want to come and ruin our coastline for us.

Britain is an island with hundreds of miles of coastline, some of which is barren and some which could do with the redevelopment which is required on shore.  We protesters are not saying anywhere is better than here as there are other sensitive sites around our coast but there are many places where a windfarm could be sited without such devastating effects on our tourism economy in the Isle of Purbeck and nearby.

The proposals are a disaster waiting to happen for tourism in Poole, Bournemouth and Swanage as, where other World Heritage Sites have seen windfarms built off their coastline, the tourism has been flattened and the large visitor numbers have disappeared.  In Swanage there are many young families who depend on the seasonal trade that accompanies the large visitor numbers.  It will not be as easy for them to find alternative work within Swanage or nearby.

The danger factors are indisputable.  Ships and sailors will be endangered by so many turbines located in the middle of England’s busiest marine leisure area and close to heavily used shipping lanes.  On a summer Sunday one only has to take a trip on an Isle of Wight ferry to see how crowded this stretch of water is with hosts of small sailing and motorised craft.

Birds and sealife will also be threatened.  Birds are vulnerable to the rotating blades because the windfarm is on the line of an internationally important bird migration route.  Strangely the RSPB has recently gone quiet on their objections.

Today, Swanage residents turned out in large numbers to line the seafront and link hands in solidarity against the proposals.  As with all protests there were the usual band who were for the project with a large number of Friends of the Earth supporters present.

The objectors did not seem to be able to get their message over to FofE that we ARE NOT AGAINST WINDPOWER.  Our objections are based on our love of one of the most beautiful parts of England’s coastline and its vibrant holiday trade.

Challenge Navitus is campaigning against two multi-national companies with huge incentives to get their plans approved and the process will run until at least the end of 2013.  These companies are aided in their quest by the Crown Estates which owns or manages the seabed around the UK coastline and is a partner in the development process.

Eneco (Eneco Holdings N.V.) has previously built a wind farm near the Dutch  coast, called the “Prinses Amalia” farm.  But it is nearly twice the  distance from the shore, with turbines that are only 60% of the height  proposed for Navitus Bay.  Let’s be clear about this, we in Swanage are not being the NIMBYs.  The three-way partnership is trying to do in the Solent what they WOULD NOT BE ALLOWED TO DO on their own coastlines.

Please visit www./challengenavitus.org.uk and add your voice to this gross violation of the English landscape.